skip to main | skip to sidebar

The History of the Murals

The murals were completed in 1953 by William Perehudoff at a time before his work was well-known. His talent, however, did not escape the attention of Fred Mendel, an avid art lover. Mendel was a Jewish immigrant who made Saskatoon his home after fleeing the holocaust in Nazi Germany. He was also the founder of Intercontinental Packers, the company where Perehudoff worked doing manual labour. In 1953, Mendel was already widely respected for his fairness, integrity, and great business skill. He was also known for the respect and compassion with which he treated his many employees. Mendel hired Perehudoff to make art for his factory in the interest of making his meat packing plant more hospitable for his employees. He also likely wished to support a talented young artist. Perehudoff made several works for Mendel in the 1950's, among them were these murals which were painted directly onto the plaster walls of Mendel's office. In later years Fred Mendel became one of Saskatoon's foremost philanthropists, and the founder of the Mendel Art Gallery.

Perehudoff went on to become one of Canada's foremost artists. He is regarded by many as the heir to Jack Bush as Canada's most important colour field painter. In 1963, Clement Greenberg, arguably the world's most respected art critic at that time, characterized art from Saskatchewan as "New York's only competition." William Perehudoff's art was likely among the work Greenberg was describing.

In 2008, Mendel's meat packing plant became scheduled for demolition to make way for a new freeway. The cost of professionally removing the murals from the plant seemed prohibitive and no organization had the money to do the work. When it became known that the Perehudoff murals would be destroyed in the demolition, several concerned citizens organized a grassroots campaign to raise money and volunteers to save the art. While it seemed impossible to afford a complete restoration, organizers hoped that significant portions of the art could be saved for less money using ingenuity and volunteers from all walks of life.
Posted by Dave Denny at 10:13 PM

This mural, painted in acrylic on plywood by artist David Ibarreta, had been located on the N.E. corner of 20th Street and Avenue E since 1995, until it was accidentally overpainted in 2009. We hope to recreate it and find it a new permanent home.

Located on the corner of 3rd Avenue and 22nd Street, the 72 ft high "Founders" mural, by artist Henry van Seters, features the portraits of seven city leaders during Saskatoon's first boom period. The mural was sponsored by Heritage Canada through the Cultural Capitals program. 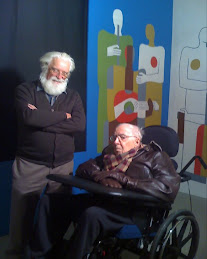 We had many visitors today to see the finished murals including the press, the Mayor, City Councilors, directors of the Mendel, U of S, and Dorothy Knowles. It was a great day, capped off by a visit by William Perehudoff himself! 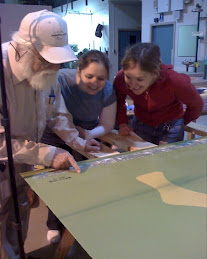 The restoration team is made up of (left to right) Ian Hodkinson, Angela Christie, Jillian Cyca, and Brenda Lee Smith (not in photo). They are working hard to have the murals restored and assembled for the showing scheduled for Wednesday, Nov 17. Ian often starts work as early as 5AM and continues into the late afternoon or evening. 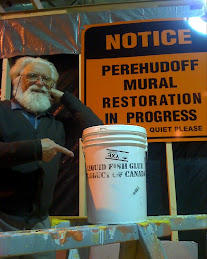 The city staff at the sign shop have been incredibly generous with their time and space. They printed the above sign (background) for the entrance of the work space. 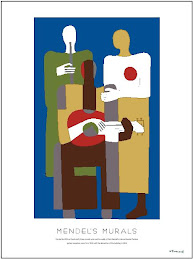 Numbered silkscreen prints by artist Henry van Seters are available for sale at the Mendel Gift Shop. These 19" x 26" prints, on archival artist papers, were made with hand-cut stencils. They are available in a strictly limited edition of 200 each with all plates destroyed. All money received will go toward funding the restoration. Excess funds, if any, will be used by Mendel’s Murals to support public art in Saskatoon.

Which print do you prefer?

If you wish to help please write your check to:

Note: We are registering as a non-profit corporation, but we are not a Registered Charity and can not give charitable receipts. 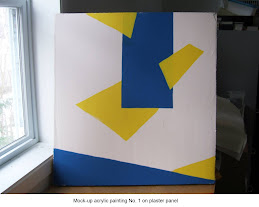 Ian spent a great deal of time since last fall experimenting to determine the best way to mount the images. He performed his experiments on this test mural which he built from the same plaster and fresco materials as Perehudoff's murals.

The Next Critical Process 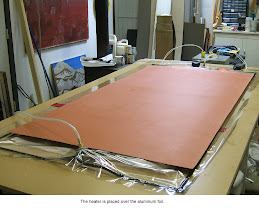 A vacuum is used to apply even pressure, then a heat blanket (red) activates the bonding agent. 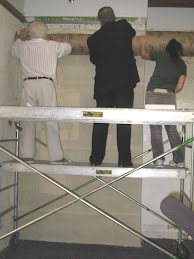 Mayor Don Atchison came to see the final mural stripped from the wall and was put to work on the scaffold. 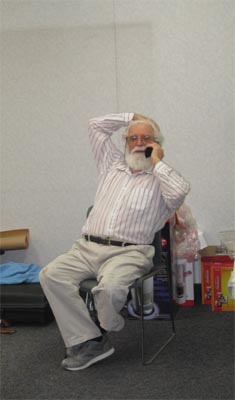 Ian does phone interview for CBC "As It Happens". 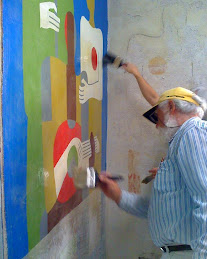 Ian and Brenda paint cod fish glue onto the wall. 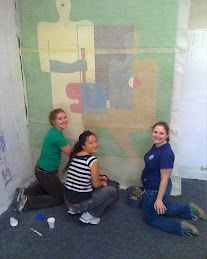 Two layers of light canvas are layered into the wet glue of the last mural. 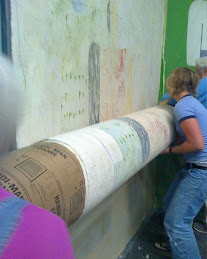 Brenda, Jillian and Ian peel a mural onto a carboard roll. 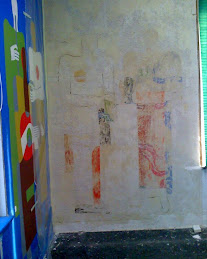 After the image is peeled off only a ghost image remains where the pigment bled deeply into the plaster.

Team scrapes plaster remnants off the back of the image before primer is applied. 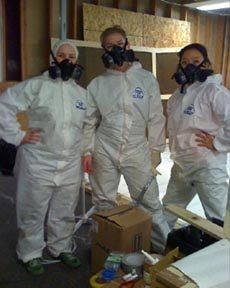 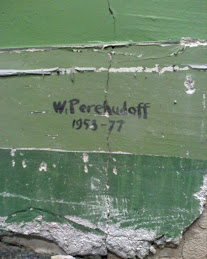 In October Ian made an important discovery when he removed the baseboards of the room. He was hoping for clues to explain how Perehudoff had once overpainted the fresco with acrylic paint. Behind one of the baseboards he found Perehudoff's original signature with two dates: 1953 and 1977. This solved the mystery of when the second paint application had occurred. The second painting was very similar to the first, however some colours were changed and some shapes were simplified. A third layer seems to also have been painted in limited areas. 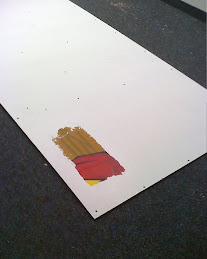 This summer a mural was ruined which had been very important to the Filipino community in Saskatoon. The painting, by artist David Ibarreta, had been located on the corner of 20th Street and Avenue E. Ian spent time during November testing a sample of the mural to determine if there was an efficient method to strip off the over-paint so that their mural could be restored. Early tests seemed to indicate that it could be restored at minimal cost using a method very similar to what is being done with the Perehudoff murals (see photo). However subsequent tests have not worked as well. The panels have now been put into storage until additional tests can be performed.

Mendel created a world class gallery on the upper floor of his factory. The room which houses the murals was originally a reception room for that gallery. The murals are visible through the open door at the left. (see detailed article at bottom of this blog).

Why the Murals are Important

Every great city has its great achievers. Honouring them can be a source of civic pride. William Perehudoff and Fred Mendel were two of Saskatoon's greatest achievers. Their impact on our city has lasted decades and will last decades more. These murals tell the story of how these two men came together at a time when they were just beginning to have a larger impact on our city. The art is beautiful, and it is an important part of Canadian art history, but the murals are also important as a legacy of the generosity and talent of two great people who helped make Saskatoon what it is today.

Mendels Murals is managed by Dave Denny and Henry van Seters, with support from the unordered list below. If you have ideas for how to make Saskatoon great or just want to help please contact us: